the-old-bailey
United Kingdom
Name: THE OLD BAILEY . Favorite quote: "Defend the Children of the Poor & Punish the Wrongdoer". Location: London. Hometown: LONDON Places lived: ALWAYS ON OLD BAILEY , LONDON. More about you: BUILT IN 1907 AND ADDED TO IN 1972 ON THE SITE OF NEWGATE PRISON. Occupation: A place of history and law. THIS WEBSITE HAS NOTHING TO DO WITH THE CITY OF LONDON OR THE MINISTRY OF JUSTICE.

Jailed: Faryadi Sarwar Zardad
Afghan warlord Faryadi Zardad has today been jailed for 20 years at the Old Bailey for a "heinous and brutal" campaign of torture and hostage-taking in his homeland.
The judge, Mr Justice Treacy, told him that the crimes of which he had been convicted "transgressed the basic rights of humanity".
Zardad had been in "a position of real power. You were personally involved in these acts of torture and hostage-taking as well as authorising your men", the judge told him.
The judge also recommended Zardad should be deported at the end of his sentence - despite being told he would face certain death if returned to his native Afghanistan.
"I consider your continued presence in this country would be to its detriment. It will be for the Home Secretary to consider the political position of the country to which you will be deported."
The warlord lifted his fist three times in salute and shouted in his own language "Allah is great" as he was led to cells to start his sentence.
He was convicted yesterday in a landmark case in which the court heard evidence of summary execution, the slaughter of 10 or 11 men in a minibus and an old man imprisoned in a metal box and whipped with a bicycle cable.
Zardad and his men also kept a "human dog" to savage victims.
Zardad, 41, from Streatham, south London, had denied conspiracy to torture and take hostages between 1992 and 1996.
Posted by the-old-bailey at 09:23

THE CENTRAL CRIMINAL COURT , aka THE OLD BAILEY. 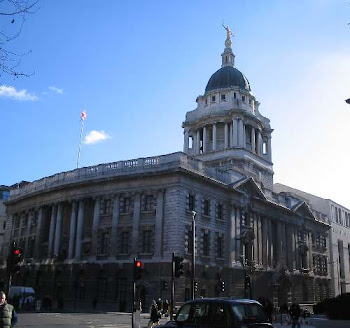